The Non-Parents’ Right To Child Custody

Many grandparents want to file for visitation or custody of their grandchild, especially when the child’s parents are battling through a divorce proceeding. While many grandparents are involved in their grandchildren’s daily lives, as well as aunts, uncles and other close non-parents, the Court does not easily grant visitation rights, let alone custody, to these non-parents.

Pursuant to New York’s case law, in order for a non-parent to petition the Court for visitation and/or custody, there is a two-prong test that must be met. First, the petitioner must show “extraordinary circumstances”. The Court of Appeals in the leading case in non-parent custody and visitation matters, Matter of Bennett v. Jeffreys, 40 NY 2d 543, 387 NYS 2d 821, 356 NE 2d 277 (1976), held that a parent has a superior right to custody over a nonparent unless the nonparent meets the burden of proving “extraordinary circumstances.” Domestic Relations Law § 72 (2)(a) indicates that the non-parent must show extraordinary circumstances, such as an “extended disruption of custody.” Furthermore, Domestic Relations Law § 72 (2)(b) defines an “extended disruption of custody” as follows:

For the purposes of this section ‘extended disruption of custody’ shall include, but not be limited to, a prolonged separation of the respondent parent and the child for at least twenty-four continuous months during which the parent voluntarily relinquished care and control of the child and the child resided in the household of the petitioner grandparent or grandparents, provided, however, that the court may find that extraordinary circumstances exist should the prolonged separation have lasted for less than twenty-four months.

The Court in Culberson v. Fisher, 2015 NY Slip Op 06144 (2d Dept. July 15, 2015), held that the grandparents were entitled to custody as the mother had a prolonged separation from the child and lacked significant involvement in the child’s life. In Sharon D. v. Dara K., 2015 Slip Op 05984 (3d Dept. July 9, 2015), the Court awarded custody of the child to the great-aunt as the mother failed to maintain a continuous relationship with the child.

While an extended disruption of custody is one avenue under which to establish “extraordinary circumstances”, this prong may also be met by showing that the parents are neglectful of the child’s needs, such as ignoring the child’s medical needs. In Yandon v. Boisvert, 2015 NY Slip Op 06177 (3d Dept. July 16, 2015, the Court held that the child’s maternal grandmother was entitled to sole custody with liberal visitation for the mother and father as the grandmother was actively involved in obtaining medical and dental care for the child while the father was frequently absent and neglected the child’s developmental, educational and medical needs.

Once a non-parent establishes “extraordinary circumstances”, he/she must then meet the second prong and establish that it is in the child’s best interest for the non-parent to have custody and/or visitation. This best interests application is similar to the factors considered by the Court under a parent’s custody petition.

While these types of cases are becoming more and more common throughout our jurisdiction, petitioners still meet a high burden of proving extraordinary circumstances in order to even get the Court to move on to the “best interests” prong. Any non-parent that establishes “extraordinary circumstances” still have a high burden to show that custody to a non-parent is in the best interests of the child. Accordingly, petitioners should consult with an attorney familiar with these limited issue cases and invest time for what is almost certain to be a prolonged battle with the child’s parents. 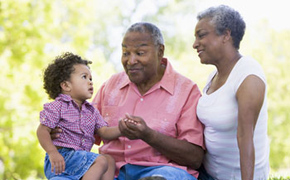